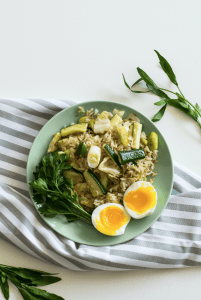 Warm. Fluffy. Moist. Nothing could beat freshly cooked rice in every meal.

But what if I tell you that you don’t have to feel pressured to toss your leftover rice away again?

Yes! You can now reheat your rice without drying it further.

In a post uploaded by TikTok famous lifestyle vlogger, Emily Mariko, she shared a video of her heating a salmon and rice in the microwave with an ice cube and piece of parchment paper on top which instantly turned viral with now 78 million views.

What’s the buzz all about?

On September 29, about a week after Mariko posted the video, Instacart tweeted that orders with salmon and seaweed have doubled on the app.

While the video inspired many viewers to do the salmon rice bowl dish, it’s the preparation that has people particularly intrigued, specifically the way Mariko reheats the rice.

We are all familiar with the traditional way of reheating rice in the microwave. For each cup of rice, just add a tablespoon of water, cover, and allow the rice to re-steam.

While Mariko’s way is not so different, the inclusion of ice and parchment paper in the process is what’s making the noise in the mainstream.

In her viral video, the TikTok sensation placed the leftover white rice on top of salmon, added ice cubes on top, and covered everything with parchment paper before putting it in the microwave.

After removing the plate from the microwave, she tossed the still-formed ice and proceeded with the other ingredients which included kimchi, Kewpie mayonnaise, Sriracha, soy sauce, avocado and dried seaweed.

Why use ice cubes?

Instead of using water like the conventional way, Mariko used an ice cube to reheat rice in her microwave. And this is making people’s eyebrows raised with confusion.

Someone has to explain, of course.

Christopher Arturo, a chef-instructor at the Institute of Culinary Education, expounded to HuffPost that Mariko’s method of reheating rice with an ice cube and cover on top before microwaving creates steam which will fully reheat the entire food on the plate.

“The ice cube gives something for the microwave to heat, and the steam will diffuse all the way through the food ― so you don’t end up with half the food still cold. Steam is a penetrative form of heat ― it heats fully, evenly and all the way through. The parchment paper lid also helps to hold in the heat. Steam goes up, hits the parchment paper and hot liquid goes down to reheat the food,” Arturo explained.

Why didn’t the ice cube melt?

Most of the viewers may be expecting for the ice cube to melt in the microwave so many were surprised to see that it was still intact. Magic? No, it’s just science!

“If Emily microwaved the food for a longer amount of time, the ice cube would melt fully,” added Arturo..

Apparently, according to The Naked Scientist in 2009, ice melts at a lower temperature than water boils but not in the microwave.

Ice doesn’t melt in the microwave as quickly as one would think. The water molecules in ice are locked in a position of a crystal structure and held together by very strong hydrogen bonds which require a lot of energy from the microwave to break.

What happens, however, is that the tiny amount of water on the surface of the ice quickly turns into steam to help reheat the rice to perfection.

Emily Mariko’s TikTok hack left so many viewers curious about the salmon dish and the preparation of heating rice the best way with the help of science. Now, you don’t have to be sad over stale leftover rice. Just get an ice cube and parchment paper and you are all set up for a happy meal.