6 Health Benefits of Ashwagandha, The King Of Ayurvedic Herbs 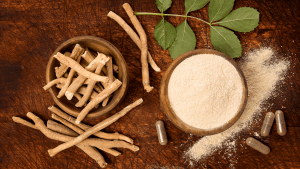 Also known as winter cherry or Indian ginseng, ashwagandha is a medicinal herb that is solidly going mainstream for its efficacy, safety and benefits

It is one of the top-selling herbal ingredients worldwide and has been gaining more popularity over consumers who are looking for natural options to alleviate stress, anxiety and mood swings

As research continues to study its power against a variety of ailments, here are a few of its evidence-backed benefits.

1. It relieves stress and anxiety.

Much of the research done on ashwagandha is related to its stress-relieving effects.

Ashwagandha is classified as an adaptogen. That means it helps your body manage stress and thereby improves your general sense of wellbeing.

In a study of 58 adults, a significant reduction in perceived stress and cortisol levels was observed after taking 250 or 600 mg of ashwagandha extract compared to those who took a placebo.

Another study also showed that participants who took 300 mg of ashwagandha daily for 8 weeks had lower levels of anxiety and fatigue.

2. It helps with depression.

Some evidence suggests that along with stress and anxiety, ashwagandha can also benefit people with depression.

In a 2012 study, it has been found that adults who took 600 mg of ashwagandha for 60 days reported 77% reduction in symptoms of depression compared to the 5% reduction in the placebo group.

3. It increases fertility in men.

One promising benefit of ashwagandha is its ability to boost fertility in men  but unfortunately not in women. Ashwagandha helps rebalance reproductive hormone levels in men, resulting in improved sperm quality and fertility. In fact, in a study on men experiencing infertility, five grams of ashwagandha for 3 months daily increased sperm count and motility.

Additionally, it also helps in the management of stress-induced sexual problems, improving libido or sex drive in men.

4. It enhances memory and cognition.

Traditionally, ashwagandha is used in Ayurveda to help boost memory. And although the mechanism of action in humans is not clear, multiple studies support this claim.

In an eight-week study, a 300 mg ashwagandha was administered to 50 adults twice daily which has shown significant improvement in immediate and general memory, as well as in executive function, attention and information processing speed.

5. It reduces your risk of diabetes.

A principal constituent of ashwagandha called Withaferin A is known to increase proliferation of cells that synthesize bone. This means it promotes bone strengthening. Aside from that, ashwagandha also helps prevent bone loss and issues due to stress and inflammation by reducing levels of cortisol, a stress hormone known to cause inflammation that can trigger bone problems such as arthritis, osteoporosis and osteomyelitis.

Generally, ashwagandha has been proven safe and effective for most people. Despite all its promising benefits to your health, it is still a good idea to let your doctor know before supplementing with this medicinal herb.