3 Science-backed Ways To Wake Up Happy 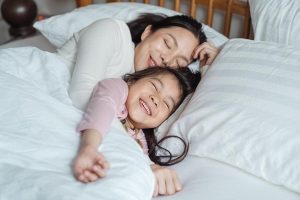 Do you find yourself wishing you were more of a morning person? After all, research suggests that early-risers are “better positioned” for success than their counterparts—indeed, it’s an advantage that nobody can say no to. But how do you make the transition from night owl to an early bird that catches the worm as smooth as possible? In today’s article, we look at 3 science-backed ways to wake up happy so that getting up early doesn’t become a chore!

Just as the dark helps us sleep, the reverse is true with light since these factors affect our circadian clock. If you want to alert your body that it’s time to get a move on, take advantage of natural light by exposing yourself to it. If that’s not possible, artificial light will do: keep the lights in the area you’re getting ready in each morning well-lit. If you find it difficult to get some shut-eye at night, which then leads to late starts the next day, here’s a tip: dim the lights at least two hours before bedtime. This will help you fall asleep more easily.

But more than just having a positive effect on sleep, lighting has been shown to affect and improve mood, according to a study with elderly people.

Nothing can wake you up faster than a workout! This is because exercise can give you an energy boost thanks to all the endorphins released by the brain. The result is increased alertness and improved mood and focus. Morning exercise is also associated with more movement throughout the day, according to this study—and because you’re on the go, just imagine all the things you can do and achieve!

We’ve all heard the saying, “Breakfast is the most important meal of the day.” And it’s true! Studies indicate that the regular consumption of breakfast has a host of benefits: lower BMI, higher cognitive performance, and even better levels of well-being and quality of life. But it can also impact mood through an endorphin and serotonin boost, so to prevent yourself from being “hangry” (hungry and angry), make sure to allow time for a healthy and nutritious meal in the mornings!

You don’t have to wake up bright and early, and with a smile, right away: it’ll take time and some adjustment. The key is to be consistent by making changes, no matter how small, each day: before you know it, you’re waking up with the sun and getting more done in the day. So rise and shine, and keep going!